The appointment of a new trustee for Cliffe Castle continues the support of local businesses for this iconic building. 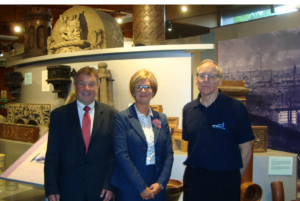 Cliffe Castle is one of the most notable assets of Keighley’s Heritage- the first house on the site being built from 1828-1833 and named Cliffe Hall.  In 1848, the house was bought by the Butterfield Family who owned three textile mills in Keighley. Sir Isaac Butterfied inherited the house in 1874 and began to transform the house renaming it Cliffe Castle in 1878. And turning it into a Victorian gentleman’s residence.

Sir Bracewell Smith, another prominent Keighley businessman bought Cliffe Castle from the Butterfield family, and settled it into trust in 1956 along with a substantial cash sum for its refurbishment and use only as a museum, art gallery, lecture hall, concert hall and meeting rooms. Furthermore, Cliffe Castle was to be open “to the public for their enjoyment during all reasonable hours free of charge”. The then Keighley Borough Council were responsible for running Cliffe Castle. Bradford Council now have that responsibility, and in recent years have overseen a complete refurbishment returning Cliffe Castle to its Victorian glory with many original fixtures and fittings returning to Cliffe Castle.

The Trustees are responsible for ensuring that the original objectives behind the gift are honoured and also to use funds at their disposal to help achieve that. Local business people have supported this by acting as trustees and this is essential to make sure that this important building remains available, both for the people of Keighley and those much further afield.

Vaughan Stell became a Trustee in 2003 and is now the Chair. Adele Gallagher has kindly agreed to become a Trustee and is this is warmly welcomed.  Both Vaughan Stell and Adele Gallagher are Directors of local long established Keighley businesses Stell Cardboard Tubes and David Gallagher Funeral Directors. Stell Cardboard Tubes have been manufacturing in Keighley for over 140 years and David Gallagher Funeral Directors have been supporting bereaved local families for over twenty years around the Keighley district.

AWB Charlesworth Solicitors, a progressive local Firm created by the merger of several Yorkshire legal practices has a strong presence in Keighley, Skipton, Bradford and Bingley with elements of its own history stretching back over 250 years. The Firm has provided legal support to Cliffe Castle Trustees for many years.

Vaughan Stell – Director of Stell Cardboard Tubes said: “I was naturally happy to accept Colin Clarkson’s invitation to join the Board of Trustees in 2003 and more recently to succeed him as Chairman. This has given me a wonderful opportunity to help the Cliffe Castle Trust, a legacy of Sir Bracewell Smith who gave the museum and park to the people of Keighley. and look forward to the restoration of the Park and Cafeteria”.

Adele Gallagher, Director at David Gallagher Funeral Directors said: “The support that both David and I have received from the people of Keighley over the past 24 years during business has been invaluable and when opportunities arise for us to give back to the town, we are always eager to offer our support. I am delighted to have been asked to join the Trustees of the Cliffe Castle Trust and look forward to supporting the group.”