“Declan was superb. He was friendly, approachable and extremely efficient”. Feedback from Dr & Mrs Savill, October 2019

“I just wanted to write and thank you for all your hard work and help over these difficult months.  You offer such a very professional service in a very supportive way and I am extremely grateful to you both” Feedback for Declan Hayes and Anna Robinson, Property Client March 2019

“Once again thank you very much for your extremely professional and efficient manner. It was a great relief to receive your ‘phone call yesterday. I do hope you will act on my behalf on my next purchase.  Thank you.” Residential Property Client, November 2018

“Declan Hayes was very knowledgeable, professional, to the point and informative. I would 100% recommend him to anyone who needs a similar service. I would also like to note the helpfulness and quick responses of his secretary Anna Robinson who was also excellent.  I would therefore hold AWB Charlesworth in high regard.  Thank you for your service” Feedback  from David Woods, property client July 2018

“I am extremely happy with the work that Declan has recently completed for me- in fact myself and my daughter have used the firms various services for a very long time and will continue to do so in the future.” Lorna Midgley, Residential Property Client, September 2017

“Thanks Declan and for your excellent work getting the date finalised on the house move when seemingly nobody else would”. (Andy Kyle. July 2016)

“Fantastic conveyancing service provided by Declan Hayes- he helped us to sell a property in Yorkshire and buy in Manchester. Despite it being a rather protracted sale, Declan kept us informed and updated regularly. It was definitely worth travelling 60 miles to use such a good Yorkshire Firm”. (Rebecca Lund. December 2015)

Declan has specialised in property matters since qualifying as a Solicitor in 1998. Declan has always worked in either Keighley or Skipton and has become very well-established in the local areas as a residential conveyancing specialist. He maintains close relationships with local estate agents, surveyors and mortgage advisors, which allows your transaction to complete as efficiently as possible. Declan also specialises in landlord and tenant matters, including leases and tenancy agreements; as well as commercial property matters.

What interests Declan about his specific area of law? “Facilitating clients’ wishes during transactional processes. As property lawyers, we can ensure achievement and a successful result for clients.”

If he were not a lawyer: Declan would want to be a Sports Administration Agent, an area in which he studied for a Diploma.

Declan’s best personal qualities: he is straight-talking, takes a direct approach with all his work and gets the job done.

The most challenging aspect of Declan’s role: Communicating with clients when the deal they take an interest in may not be right for them.

Declan describes his typical workday as ‘full-on and hectic!’ 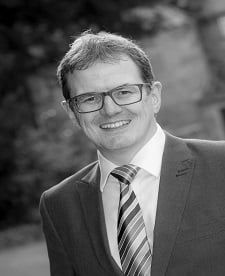